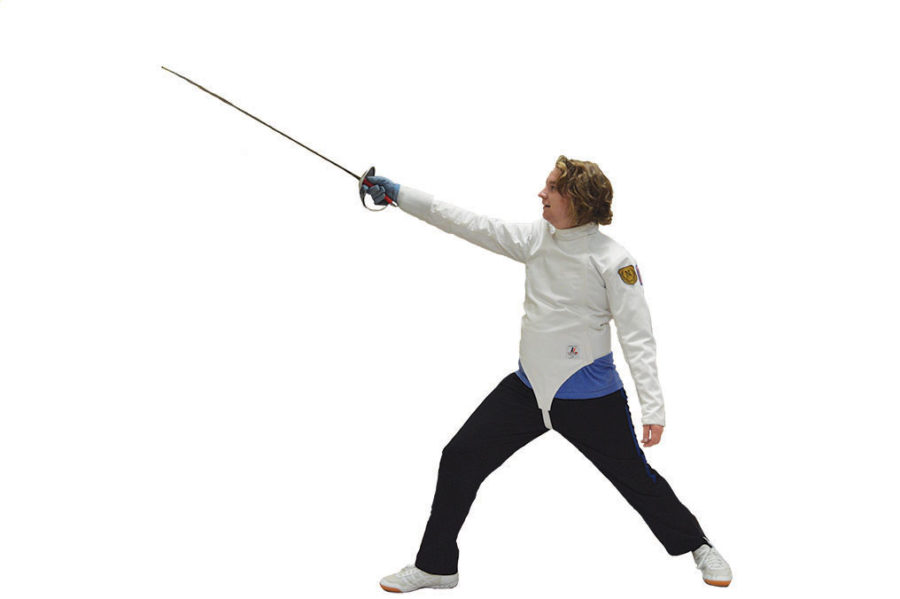 Baxter poses for photographer during a Thursday fencing practice.

Others, however, some simply become fencers through word-of-mouth, and that’s exactly how junior Trey Baxter joined the NHS Fencing Club. After a few conversations with friends, Baxter joined his sophomore year.

Baxter had tried playing numerous sports such as basketball and baseball before he began fencing, but nothing seemed to really click for him.

“[Most] sports are team sports. A lot of what you’re doing is relying on your team, but with fencing, you’re forced to look at yourself,” Baxter said. “You can’t rely on someone else and hope that they can do what you couldn’t do.”

“Most of what you’re doing is thinking of how you can outplay the opponent. It’s not like in
football, where you can just overpower someone and tackle them. You have to outthink them. You can’t just use pure strength to win,” Baxter said.

Being in such a competitive atmosphere can sometimes make people feel one of two ways: suffocated or motivated. Baxter admits that he falls on the motivated side.

“I really like the competition aspect. I feel like I really earned it when I win. It’s like I outplayed the opponent,” Baxter said. “But also when you lose, there’s an introspective aspect of it, like looking back and trying to improve as a fencer.”

Baxter concedes that outthinking and strategizing against the opponent is definitely his favorite part about fencing, and he has learned to apply this strategic way of thinking to other areas of life by using an idea in fencing called the “tactical wheel.”

“For every action, there’s another action that can beat that. I’d say that mindset has changed me in a way because if something is not working, I’ll think ‘Maybe this isn’t the way to go about it,’” Baxter said.

Baxter’s love for fencing has rubbed off on to other people in his life. He has even inspired his little brother, Nyle, to start fencing.

“He’s a bit of a copycat. I told him my favorite color was orange and now he swears that it was his idea to have the favorite color orange,” Baxter said. “He looks up to me a lot, so that’s cool. I definitely got him into fencing and I wanted a practice target at home so I kind of pushed him to do that.”

Not only does Baxter find it fun to fence with his biological family, but also with his non-biological family. For a sport where opponents poke and slash each other, the fencing club seems to be a tightly knit group with a shared sense of comradery and respect.

“Everyone in fencing has to work together in order for us to achieve our goals. You have to be willing to accept advice from others to improve, so being comfortable with the other fencers is huge,” Baxter said.

The idea of fencing being a giant family is a mutual feeling among other members, like junior Steven Hahn.

“When you come to high school it can be a bit of a shock. Everything seems so big and after being at the top of the food chain in middle school, you’re shoved back down to the bottom. Fencing gave me people I could trust,” Hahn said.

Hahn also recognizes the strong bond between him and other fencing members.

“When I joined, it didn’t feel like I was fighting my way to the top of something anymore. I’ve been in fencing for three years now and I’ve grown with these people. I’ve seen them through their best and worst times,” Hahn said. “They’re some of my best friends. We are a family, we are always there for each other and we always will be.”

Members note that fencing is such a positive environment which offers more than just a blade and a mask: it offers friendship.

“I’ve seen lots of other people develop friendships through fencing. [Fencing] can be great [for] connecting [with] people,” Baxter said.

“Obviously not everyone in fencing is the same. Everyone has a different background or home life, but from 3:00 to 4:30 on Thursdays after school, everyone is in there to fence and have fun together.”