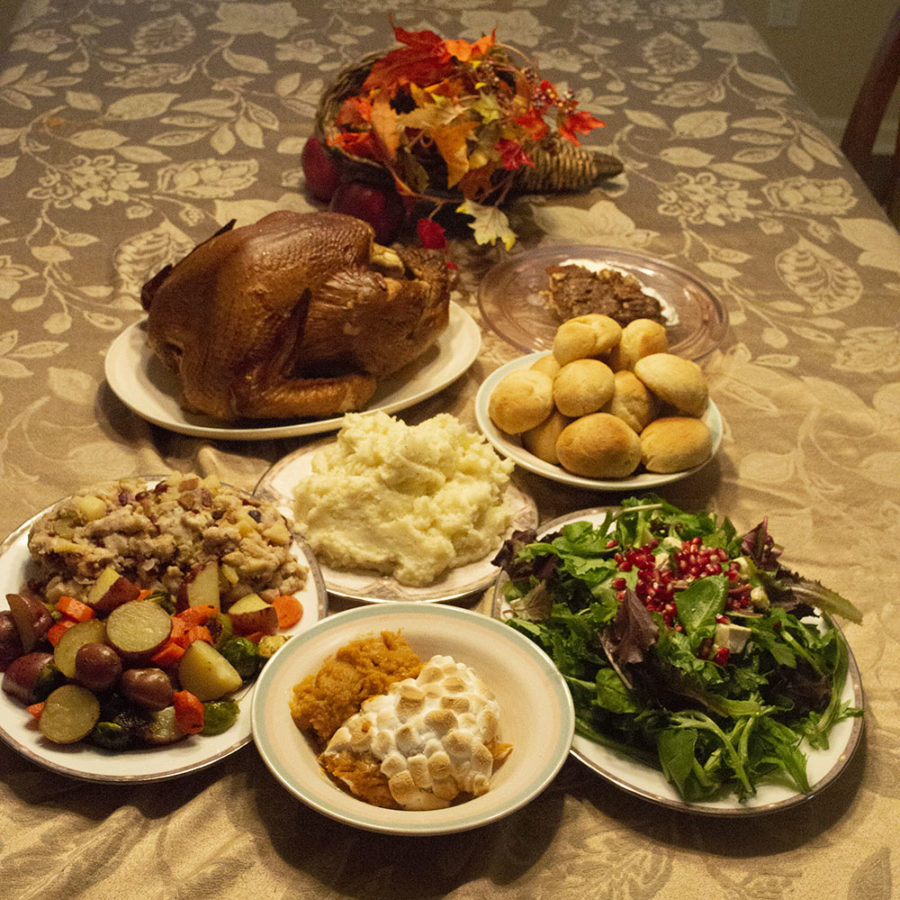 The secret to roasting a turkey without drying it out is brining. In this case the brine would simply consist of salt and water. Using the ratio of one tablespoon of salt per cup of water, make enough brine to fully submerge your turkey. Let it brine for 24 hours, then rub a little olive oil, salt and pepper on the turkey, throw it in the oven and you’ll be set.

If made right, stuffing has a flavor profile that is second to none. For the stuffing you’ll need:

Place bread into a large bowl and add the cooked sausage mixture.

Slowly add chicken broth and mix until desired moistness is reached. Keep in mind that if you are going to bake your stuffing, it will lose moisture in the oven.

Put the stuffing inside of the turkey cavity and bake according the birds packaging instructions.

It isn’t Thanksgiving without buttered rolls, this recipe makes 20 rolls perfect for your holiday dinner. For these rolls you’ll need:

To start, get all your ingredients measured out in one place.

Mix on low speed until all ingredients are incorporated.

Mix on medium speed for 15 minutes. Add small amounts of flour as needed until the dough pulls away from the sides of the bowl.

On a lightly floured surface knead lightly to form a ball. Place the dough in a lightly oiled bowl, cover, and let sit for an hour until the dough is doubled in size.

Separate the dough into balls, about 2 ounces each. Place the balls on a buttered 19 x 13 baking sheet, with no space between them.

Brush the tops of the rolls with egg wash (one egg whisked together with one teaspoon of water.)

Bake the rolls at 375˚ until golden brown and cooked all the way through.

To start, wash and peel your potatoes (as many as you want). Boil water and add the potatoes. Cook until tender when poked with a fork. Then, drain the water and use an electric hand mixer to break down the potatoes. Add butter, salt and pepper to taste. Use the hand mixer until the potatoes have a creamy texture.

An easy side, this consists of carrots, brussel sprouts, and baby red potatoes. Begin by cutting carrots into bite size pieces, and cutting your potatoes and brussel sprouts in half. Lightly cover with olive oil, then season with salt and pepper to taste. Roast the veggies at 400˚F until the potatoes are tender when poked with a fork.