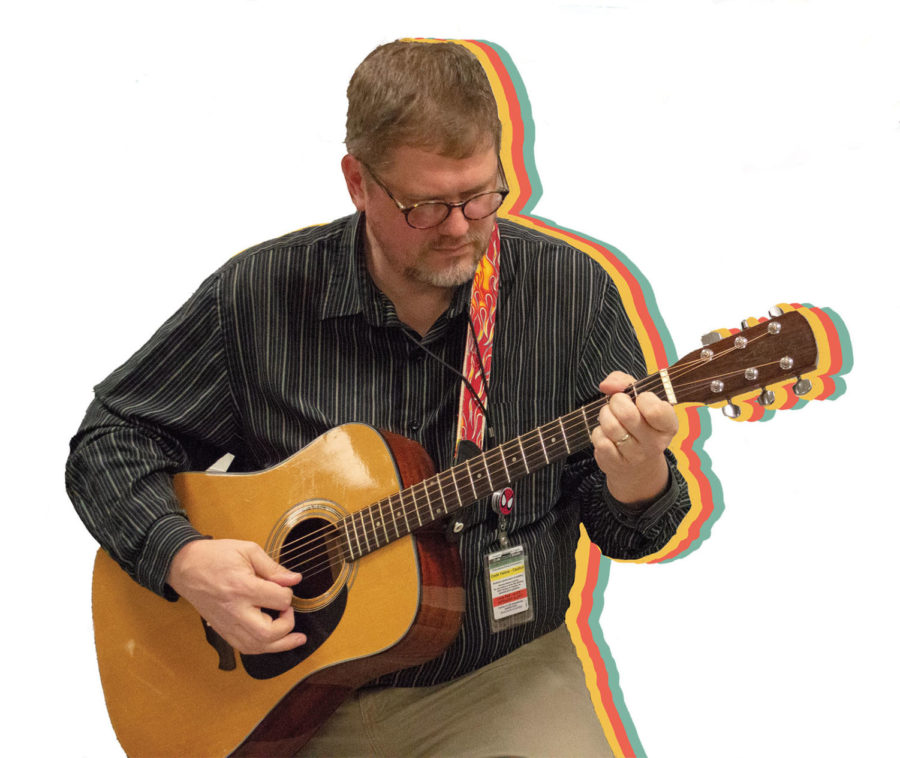 He is usually seen outside the guitar, piano, and studio hallway, sometimes brandishing his guitar. He has a friendly smile and an almost boundless knowledge of everything music. Yep, it’s Jay Jasper.

Jasper teaches a variety of electronic music and guitar classes at NHS. According to Jasper, he’s always lived in an environment saturated with music.

“My family is very musical,” Jasper said. “My dad was a singer and my mom was a church organist, so I grew up in a house that had a lot of music. Even before I was in elementary school, it was something my family just did.”

Jasper graduated from Hanover with a degree in vocal performance, but his plan was always to teach music, not perform it.

“I decided I wanted to be a music teacher when I was in seventh or eighth grade. I was in junior high, and I kind of thought to myself, ‘My choir director has the best job in the world. I think I need to do something like that,’” Jasper said. “I wasn’t one of those people [who thought] ‘I’ll go off to college and then I’ll try to become a musician. If that doesn’t happen, I’ll fall back on teaching.’ I wanted to be a teacher from the start.”

Before Jasper started teaching at NHS, he taught in Indianapolis Public Schools for eight years. Since coming to Noblesville, he’s started the electronic music classes which teach students about songwriting and producing music. Jasper believes that for students to be successful, they must have strengths in multiple areas.

“I think one of the aspects of the philosophy I have about how to teach is that teaching my students to become creative thinkers is more important than the specific content that I’m teaching,” Jasper said. “I think [music is] essential for students to be well-rounded students, for them to be able to be critical and analytical and that sort of thing when they’re doing something.”

Jasper says that when students are more well-rounded they become better problem solvers.

“For example, if a kid in Guitar Two starts looking at problems with a more creative eye because they had to write their music for Mayfest, I think that’s as important, if not more important, than anything else in the curriculum that they might be taking in their other classes, because now they might come up with better ideas,” Jasper said.

Outside of the classroom, a lot of Jasper’s life still revolves around music. For example, he’s a member of a bluegrass band which has recorded two albums.

“That band was called The Lonesome Sharks,” Jasper said. “That was part of the reason why I wanted to do a recording class here at the high school.”

“We play in the David Hartman Band which plays on the square during the jazz concerts that Noblesville Main Street puts on,” Hartman said. “So in the fall, we’ll rehearse once a week together for a while until we do our concert.”

Though Jasper’s life mostly revolves around music, he has valuable advice for anyone trying to pursue anything.