A day in the life 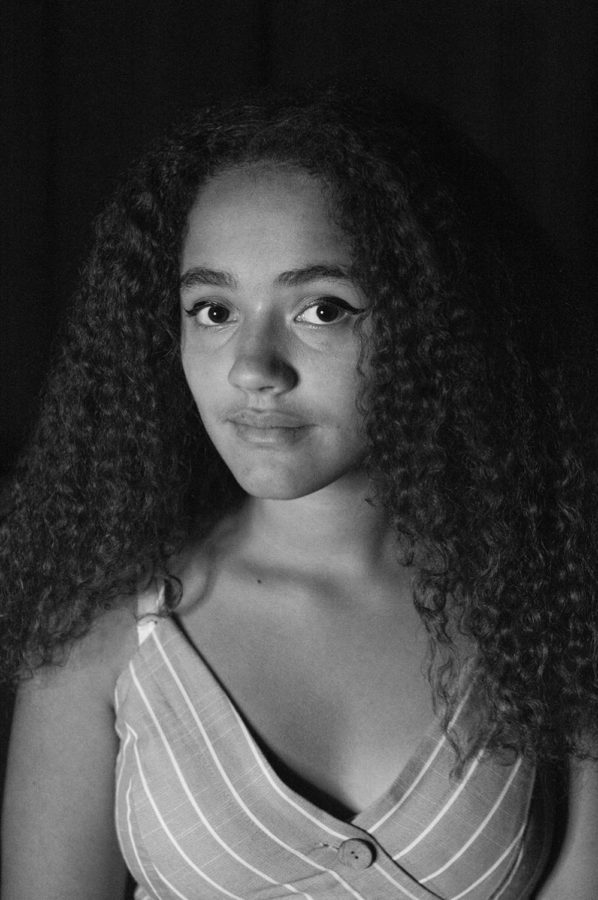 Last fall, after a student reported an instance of racial slurs and threats scribbled onto a bathroom stall at NHS, many students noticed a tension in the Noblesville community around the issue of race. At a school where it’s common to see only one or two students of color in a classroom, this can be a touchy subject for some. Many students say they feel a need to tiptoe around these conversations, unsure of what to say, and cautious about how to handle such a difficult subject—but always aware of it, nonetheless.

Researchers agree that in the U.S., the color of a student’s skin can affect their experience at school beyond just the insensitive jokes they may hear. According to a study conducted by ProPublica that examined statistics released by the U.S. Department of Education (DOE), a student of color at a distressing number of schools across the U.S. is potentially confronted by both a decreased opportunity for high-level coursework, such as AP classes, and a higher likelihood of being suspended or expelled than a White student. This includes most school districts in Hamilton County.

But what about Noblesville? First-hand accounts from students of color at NHS can paint a picture of a day in the life of people whose stories are sometimes not heard.

It’s no surprise that the majority of students attending Noblesville High School are White, but how does this ratio affect the experiences of students of color at NHS? On one hand, some non-White students say they sometimes feel singled out from their peers. However, other students say the situation doesn’t bother them. But regardless of how students view the social environment in Hamilton County, racial issues are still a concern for many within NHS.

In November of 2018, when threats were written on a bathroom stall, NHS handled the issue quickly, and identified the student responsible. Following the incident, a livestream was broadcast to the entire student body, which received mixed reviews from parents and students.

The school arranged the presentation to discuss an issue that needed to be addressed, according to NHS principal Jeff Bryant.

“There are students at Noblesville High School who feel that day to day, they aren’t treated the way that they should be treated, that they aren’t treated with respect [or] dignity,” Bryant said. “And as a principal, that bothers me, because we have 3,000 students and we want everyone, no matter what color they are or what gender they are to be comfortable at school.”

Melinda D. Anderson, an education writer who reports on race and equity in education for The Washington Post, The Atlantic, Teaching Tolerance and Vox Media, says that schools need to reassess what is being taught to students about issues of race inside the classroom.

“It’s as important to probe what white children are learning —and not learning— in school about race and racism,” Anderson said, “as it is to engage with these crucial issues for the sake of Black, Hispanic, Native, LGBTQ, Muslim, disabled, immigrant, and other marginalized students.”

Bryant points out that racism at NHS cannot go away with the flip of a switch, but he claims that being empathetic toward non-White students is the first step to improving the situation.

“There’s not enough of those students yet who are willing to take this on and do something about it. Students have to be empathetic towards others. If I’m a student, if I’m telling you that something is bothering me, it’s not your right to tell me, ‘Well you shouldn’t be bothered by that,’” Bryant said. “What our students need to do is to be empathetic towards that. As a school, we need more students who have an empathetic mind to be able to respond appropriately.”

Keishon Jarrett (NHS junior): The jokes that you get, the name calling, the racial slurs that are covered up as jokes. It’s not funny, it’s unacceptable, and it’s literally disgusting.

Joyce Roberts (NHS sophomore): Sometimes I’ll have random guys come up to me in the hall and be like, ‘So I heard you were Asian. Asians are really hot in my opinion,’ and I just don’t want to hear it. I don’t want my race to be the reason why you’re attracted to me.

Macy Meunier (NHS sophomore): A lot of it hasn’t been overtly discriminatory, it’s just being singled out for being me. There was one time when I believe we were on the DC trip in eighth grade and they were talking about slavery, and the person who was in charge of the talk specifically looked at me and talked about how ‘Your ancestors must have been so strong.’ Which is, it just makes me feel like I’m not part of the crowd that everyone else is with when I’m singled out for something like that.

Sachin Gupta (NHS sophomore): It’s not brought up too much, but there’s always that one kid that’s going to say something vulgar and racist. You can just pick those people out, I guess.

Izzy Steenberg (NHS sophomore): It’s not something that sticks out in my head everyday, but there’s little things that you get everywhere, like being stereotyped and people making assumptions about me because of my skin color.

Meunier: There are just some things that people will point out that you don’t point out or ask someone else. If you’re Caucasian, you don’t get asked ‘Where are you from? No, where are you really from?’

Steenberg: When you grow up in Hamilton County, I feel like it’s a bubble and you’re not exposed to a lot of different things until you’re older.

Meunier: I wouldn’t say that it’s not a welcoming community. I will say that a lot of people in Noblesville have been really great to me and that I’m thankful for those people, but there have also been times where I haven’t felt as welcome or I felt singled out or things have happened that have been specific just to me and didn’t seem that anyone else got that experience.

When it comes to the issue of race at Noblesville High School, Bryant is clear about what needs to be said.

In addition, the social aspect of race at NHS isn’t the only concern the school faces. According to the U.S. DOE’s 2016 civil rights data compiled by ProPublica, White students at NHS are 2.9 times as likely to be enrolled in at least one AP class as Black students. Only 1% of NHS’ AP course students are Black.

“[Black and Hispanic students are] more likely to be discouraged from enrolling in AP and advanced classes even when they’ve shown an aptitude for more rigorous coursework,” Anderson said.

Along with encouraging more non-White students to become involved in academically rigorous courses, Anderson claims that racism should be talked about actively inside classrooms in order to foster a more understanding environment.

“To counteract racial discrimination in education policies and practice, educators must acknowledge race and address racism in their schools,” Anderson said. “Schools play a huge role in fostering cultural and social understanding—and teachers are at the forefront of this important work.”

During the 2018-19 school year, NHS has worked to actively listen to minority students, establishing a Black Student Union and the Diversity Coalition, according to Bryant.

“What I can promise our students is that we hear, we listen, and we are making ground,” Bryant said.

Jarrett: I sat with another African American student and [the teacher] got our names mixed up. That’s the assumption that all Black people look the same. I was already offended.

Jeff Bryant (NHS principal): Our discipline data is too high for Black students, which means that we’re not doing a good enough job serving our minority students. I’m just being open and honest. We have to do a better job.

Anderson: We know without question that a student’s race or ethnicity can influence their ability to receive an equitable public education. Many teachers enter classrooms believing they just teach a subject, and they reject the need to talk about race and racism. That’s a flawed perspective—because teachers don’t just teach math or chemistry or English; they teach that content to human beings.

Meunier: I’m not saying the school community is bad, but there have been times when I’ve been called names or people have gone after me for it, and it sucks.

Meunier: I think there’s definitely facets to my life at NHS that are different being mixed race than if I were a different ethnicity. And it’s not all bad, but there are some aspects of it that are discrimination, and it’s difficult to live with that.

Anderson: There is not a single state in the nation with a teacher population that’s as diverse as its students, and in some cases there’s a vast gap. We need more Black, Hispanic, and Native American teachers standing in front of public school classrooms.

Jarrett: When you walk in you already feel singled out. You might have one or two, maybe three if you’re lucky, Black people or any type of minority in your [class]room.

Roberts: It gives me a better understanding, especially since I’ve been traveling my whole life, back home and back here. The cultural difference and the culture shock is so large, it’s crazy.

Steenberg: To my fellow students of color…be proud of [your] skin color, ethnicity, and race, even when the school or the community doesn’t make you feel that way.

Meunier: Everyone is equally valuable, no matter what their ethnicity is, and I think people need to just honestly show empathy and kindness to one another.

In many predominantly White schools, it’s becoming increasingly common to find a Black Student Union (BSU) among the list of student groups. In the past year, NHS has formed its own BSU.

The Noblesville group is primarily run by students and focuses on making a difference for students of color in the school.

“Our mission is to unify Black students and provide opportunities for those students to explore their cultures, promote Black student representation and raise awareness of Black student issues,” BSU’s sponsor Lois Young said.

NHS junior and BSU member Keishon Jarrett says that the group is helpful for him and his peers.

“[The Black Student Union] talk[s] about all of the stuff that we go through and we talk about how we can make things better for ourselves, what we can do to make it more comfortable for everybody altogether,” Jarrett said.

NHS Principal Jeff Bryant says that the BSU is a positive addition to the school community.

“I think the creation of the Black Student Union is certainly a place that students of color can go to and feel safe to say what they need to say,” Bryant said. “As a school, we can’t start fixing problems if we don’t first listen to what the problem is.”

According to Young, the group wants to promote representation and recognition of minority students of the school, specifically for Black students. However, it’s not only for students of color.

“BSU is not just for Black students,” Young said. “We want all students to feel welcome. They are more than welcome to come in and participate in our meetings, and feel connected, and if they have any questions, feel free to reach out to any of our students. We do want that partnership, and we do want to be a part of the school culture.”