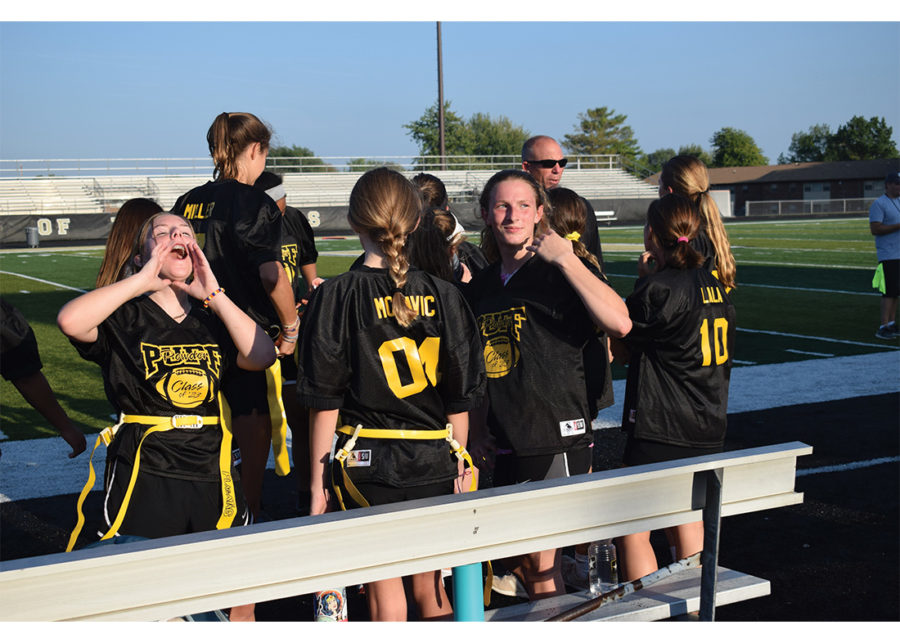 Freshman Abby Pittman cheers for her teammates. She is also in the Sensation show choir.

Homecoming: a week full of festivities specially tailored to build excitement and anticipation within the student body—all for a dance and a football game. Although fancy pants and glittery heels for the Saturday dance are the focus of most teens’ days, one often overlooked homecoming activity calls for more fierce than fancy. Powderpuff players often choose their cleats and jerseys over heels and dresses during homecoming week.

Biology teacher Jessica Sturgill has coached Powderpuff for four years. She believes the sport affects the players in an unconventional but positive way.

“It’s a chance for people to get to hang out, and they get to feel the school spirit in an unconventional way,” Sturgill said.

Freshman Lauren McGavic agrees with her coach. She loves playing with her teammates and having as much fun as possible. Although their time together is short, like most Powderpuff players, she grew close to their teammates.

“I just get to have fun with new people, and make new connections, and memories,” McGavic said.

Senior Beonica Fair plays rugby in addition to powder puff. She also enjoys playing with her classmates during their last homecoming. However the excitement the players experience spreads beyond the team.

“I play because I love that everyone comes out to support their class and the excitement they bring,” Fair said.

Powderpuff is not only a sport used to hype up the student body during homecoming week. The players involved have enjoyed other aspects of the game, and say they have seen positive effects on several parts of their lives.

“It definitely gets [players] out of their comfort zones,” Sturgill said, “and it also gets them to meet people they wouldn’t usually meet in their friend zone because a variety of students participate.”

With some effort, recruiting girls for a year-round flag football team may not be hard. Students like Pittman say they want to be involved in Powderpuff, they just need the opportunity and information to do so.

Freshman Jaydi Jones appreciates new opportunities Powderpuff has given her, as well as the different skills she has learned. Her favorite part of Powderpuff is the satisfaction from finally getting a play right.

“That feeling is just awesome, seeing our hard work pay off,” Jones said.

Pittman enjoys Powderpuff for more than the social time or new opportunities. Football is a typically male dominated sport, and Powderpuff allows girls the opportunity to try something they’d otherwise miss.

“I really like being able to actually try out football, even though it’s just flag football, I just like the concept of it,” Pittman said.

However, biology teacher and junior coach Bailey Mann mentioned the struggle it took to recruit girls. Due to the short length of the sports season, there is not much time to inform and recruit interested students.

“We really had to try hard to get people interested,” Mann said. “Juniors had a decent turn out, but I know the senior team took a lot of time to get girls interested.”

Sturgill wishes that Powderpuff could last longer. If it could become a seasonal sport or a club, she says she would like to play against other schools. Playing against schools such as Westfield and Hamilton Heights could promote friendly competition to motivate the players into growing their skill set, according to Sturgill.

“I think it’d build up more momentum,’ Sturgill said. “I think it’d be fun to be able to compete against different teams and get it to be a big more common thing.”