The butterfly effect: Giving hope to the world one shirt at a time 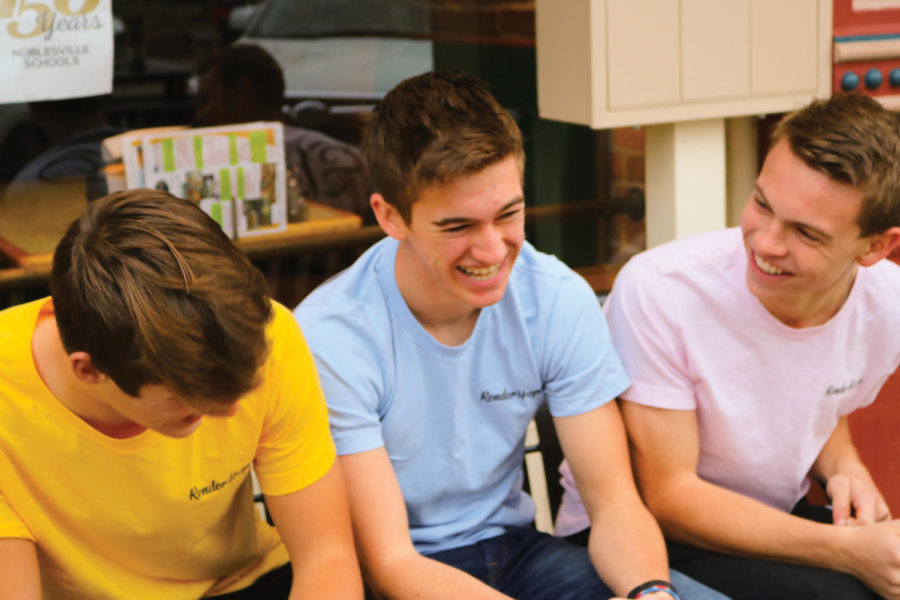 Render is a word that sparks thoughts of compassion and giving. It’s a simple but powerful idea. Noblesville High School students Carter Dubson, Briton Condellone, and Conner Meinerding created a t-shirt company named RenderHope that takes this word to heart.

In May of 2019, the three partners decided to live a life of service by creating a business that gives back to non-profit organizations. Their new company is dedicated to giving hope to the world, one shirt at a time.

“We came up with the idea through DECA. DECA is a business club within the school to [develop] leaders within our school and make them prepared for the business world,” Dubson said. “I have a heart for missions, which is a lot of what we are doing. We wanted to make a t-shirt company that would give back to the community.”

Inspiration for RenderHope was also sparked by the group’s interest in philanthropy, which was instilled in them from the beginning.

“I go to Holy Spirit [Church] at Geist, and all of my life, I’ve been exposed to helping people or giving back whenever you have extra,” Meinerding said. “I took it to heart and created a company to be able to do that.”

Condellone had a similar perspective rooted in mission trips and helping Nehemiah Vision Ministries, a humanitarian organization that helps with health services and education in Haiti.

“I go to Genesis Church and I’ve been there for seven, eight years. They pair with a lot of non-profit organizations like Nehemiah,” Condellone said. “It’s kind of changed the way I think…how happy [Hatians] are with what little they have.”

Although the three decided that from the beginning they wanted to create a company to donate to those in need, they weren’t always set on selling t-shirts.

“Originally our first business idea [was] to create an eco friendly straw. And we [were] going to call it the ‘Eco-Swizzle Stick,’” Dubson said, laughing.

“We were really serious about that for a little bit. We had a design, we had stuff we wanted to make it,” added Condellone.

However, through countless conversations and disagreements on their product and design, Condellone, Dubson, and Meinerding migrated to selling clothing. Specifically, they focused on t-shirts with a butterfly featuring the Fibonacci sequence, a natural series of numbers that grow exponentially.

“We decided on the butterfly because we are trying to encompass the butterfly effect,” Dubson added. “One small change or one small thing that you do, one small donation can create a big impact around the world.”

With their meticulous design, Dubson, Condellone, and Meinerding wanted to give customers a choice on where they donate their money.

“Ten percent of our revenue goes towards the charity of the customer’s choice,” Condellone said.

“We want to increase [our contribution percentage]. Right now, just because of our legal costs and cost of t-shirts, we just aren’t able to afford it as three high school students,” added Dubson. “We are trying to create that impact, but we can’t as much as we’d like to right now.”

Dubson, Condellone, and Meinerding specifically chose three organizations that give back to the community: David’s Well in Panama, Nehemiah Vision in Haiti, and International Disaster Emergency Service in Noblesville.

Because of the overwhelming support from their peers, RenderHope sold more than 60 shirts in about three days. Junior Gracie Friesen is one of the many customers who purchased a shirt from RenderHope.

“Many high schoolers don’t have an opportunity to do charity or give to a cause,” Friesen said. “RenderHope provides an easy way to give, with options of where your [money] is going.”

Though the organization has succeeded thus far, the three companions still have high hopes for the future and don’t plan to stop growing their company.

“We have a lot of goals and they are probably too big of goals for high school students,” Dubson said. “But, you know, reach for the sky…”