An action step: NHS makes an effort towards social awareness 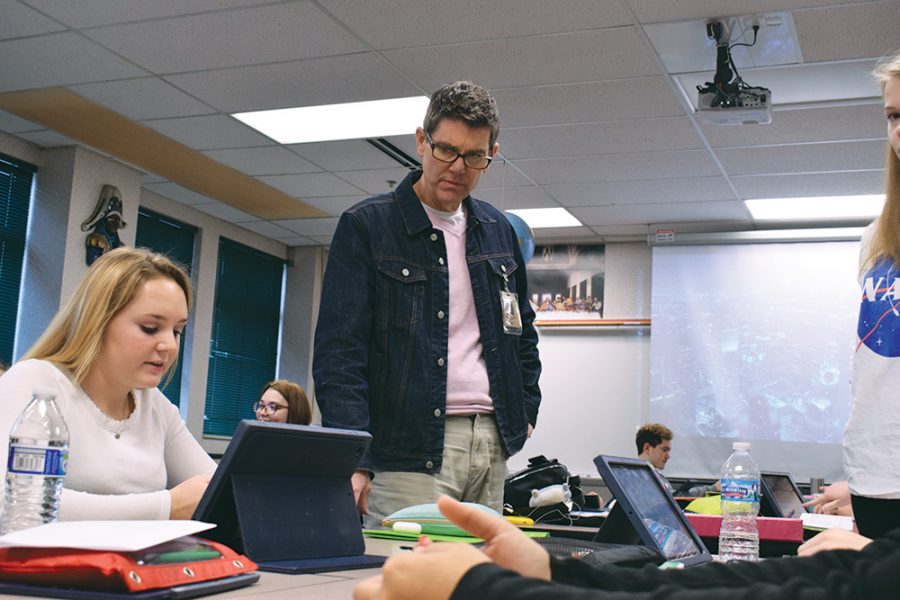 Explorations in Social Justice teacher Stanley Abell assists one of his students.

Further than any book can recount, humans have struggled through injustices of every shape and size. Through microaggressions and full blown hate crimes, society has made an effort to weaken the links in the endless chain of prejudice.

With the addition of the Explorations in Social Justice class, Noblesville High School aims to call attention to this struggle, to educate the next generation on the sensitive topics that affect many’s everyday lives.

“We have a range of topics—racism, sexism, to mention just a couple—that we cover throughout the semester,” Social Justice teacher Stanley Abell said. “[Those] are issues that were kind of driven by things that had happened inside the hallways at Noblesville High School.

At the end of the term, students of the Explorations in Social Justice class participate in a project that allows them to find a problem and take a step towards helping the community with the issue.”

Part of that project is creating an action step,” junior Abby Retz said. “It was very eye opening to see different people’s perspective on all of those inequalities and what they did to help the community.”

It’s not hard to see how some students can be hesitant to step into controversial discussions, especially with past occurances of racially-charged incidents at NHS.

“I think there’s maybe some skepticism on some people’s part around the class because we can’t help but in our day and age feel like some of the issues are politicized,” Abell said. “But the way that we address the issues in class is in a nonpolitical way.”

The students who push through their skepticism share few complaints about their choices to join the class.

“I kind of took a chance on it and I was like, ‘Okay, we’re gonna spend the semester doing this and if I hate it, I’ll talk to my counselor,’” junior Macy Millspaugh said. “It turned out to be a lot more fun than I thought it would be, so I stuck with it, and I actually love it.”

As the class grows on its participants, it’s easy for them to be attentive to the issues they’re learning about.

Through the student’s efforts in understanding others’ struggles, they say they’re able to apply it in their everyday life in ways they were not able to before.

“I think it’s great that people are going to actually putting something out into the world that does good because of this class,” Millspaugh said. “It’s awesome that I’m going to get a chance to do that.”