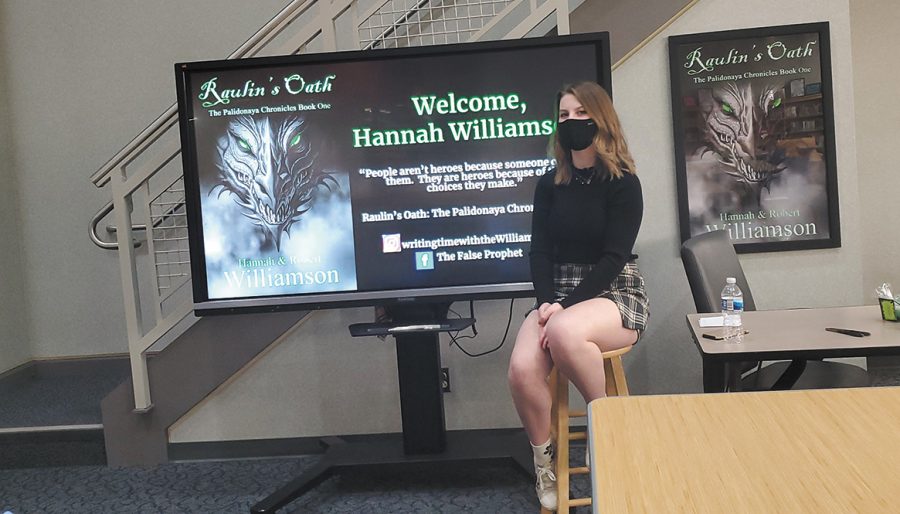 NHS junior Hannah Williamson holds an Author Day at Noblesville East Middle School. She discussed what it was like publishing a book at such a young age.

As a young girl hospitalized with juvenile arthritis and a grim prognosis, someone who is almost out of time, Arietta looks to her grandfather for help. To heal, her grandfather teaches her how to dreamwalk to another world using a golden coin. In this world she finds healing, but she gets stuck on the other side because of a Dragon King who wants to burn down the world and take what’s his. Arietta is trapped on this other side in this foreign world without anyone there to help her. Everyone in this world thinks she’s a chosen warrior, but in actuality she’s just a scared kid who is trying to survive.

Arietta’s story is told in “Raulin’s Oath”, a fantasy novel written by junior Hannah Williamson and her father Robert Williamson. The idea for the story came from stories Robert Williamson used to tell his daughter when she was younger, about a girl who had the ability to travel in her dreams to another planet.

“For me personally, the inspiration came from knowing my roots as a writer and how those can trace back to the bedtime stories Dad used to tell me and how that inspired me to tell my own stories,” Hannah said.

After approaching her father with the idea and a pre-written prologue, Hannah convinced her dad to take on the difficulty of writing a novel together.

“It was a good challenge. A lot of it was learning how to blend our writing styles, but at the same time it was a really good bonding experience,” Hannah said. “We used to go grocery shopping together all the time, and on the ride to the grocery store we used to go over our ideas and where we were going to go next. We had word counts every day that we had to meet, so it was just a really fun challenge that tested our discipline and teamwork skills.”

In order to finish their novel in the span of three months, the Williamsons completed the NaNoWriMo (National Novel Writing Month) challenge, where every day the pair had to write 1,000 words each and attempt to blend their individual writing styles.

“One of us would sit down in the morning—Dad was normally the morning person— and then the other would sit down at night and each would write our thousand words and go off of and review the previous writing,” Hannah said.

Even though it was a challenge trying to write an almost eighty-thousand word novel, composing “Raulin’s Oath” was nothing compared to what came next.

“The editing process was hard. With our first book, we hired an editor—Alexandra Ott—to do what’s called a developmental edit to help with the plot lines and the story arc and developing characters,” Robert Williamson said. “She gave us a five-page paper on things we should think about changing, and we also had her do a copy edit, and we went through and fixed I-don’t-know-how-many errors in the first draft.”

Along with writing and editing, the Williamsons had to self-publish because they struggled to find representation for first-time authors.

“We sent our manuscript to, I think, maybe 50 different agents, had multiple rejection letters, and then we really decided to self publish because it’s so hard to get an agent when you don’t have the writing experience, you don’t have the awards,” Robert Williamson said. “When you self publish, you are in charge of every aspect of the book. One of our social studies teachers at Noblesville East helped me with the cover that Hannah and I designed, we had to do our copyright page, we had to open an LLC to publish, and we had to get all of the tax papers in order.”

Currently, the pair is working on the final read-through of the Palidonaya Chronicles’ second book titled False Prophet, and are hoping to get it published and available during the summer. Meanwhile Hannah Williamson is working on her own projects.

“I have written three novels other than “Raulin’s Oath”. They always say you have to write your 10,000 words before you get anything of worth, and I feel like that’s what those three books did for me. It was learning how to write and how to finish a project. It also taught me a lot about world building in fantasy because I have always been a fantasy writer,” Hannah Williamson said.

“She’s about as polished a writer as I’ve ever had in class. That means her pacing – the way she switches between dialog, description and exposition for example – feels like a pro’s,” Kenley said.

In addition to Kenley, students at NHS who have read “Raulin’s Oath” give the novel and Hannah’s writing style high praise.

“I really like “Raulin’s Oath”,” senior Macy Millspaugh said. “Hannah’s writing is both complex and interesting, and I really enjoyed the characters. I would absolutely recommend this book to a friend.”

Hunter Smith, an eighth grader at Noblesville East Middle School and a big fan of “Raulin’s Oath”, agrees and describes his favorite part of the story and his favorite characters.

“Right now it’s when Jerry goes into the dragon area because it’s an interesting part and it’s where I am now. I can’t decide between Lucius and Jerry for my favorite character. I really like the morally gray Lucius, but Jerry is really well written,” Smith said. “It is a very good book and I recommend that everyone at least reads the beginning.”

The pair wants readers to take away from “Raulin’s Oath” that fate does not choose who the heroes are, they have to wake up every day and choose to be a hero.

“Also we want to give a voice to characters who usually don’t get a voice. . . It’s a lot about overcoming fears and choosing the right thing rather than being expected to choose the right thing,” said Hannah Williamson.

“Raulin’s Oath” is available for purchase on Amazon and Kindle Unlimited, and more information on the Williamsons’ progress is available on Facebook groups (Raulin’s Oath and False Prophet), as well as on Instagram (@writingtimewiththewilliamsons).