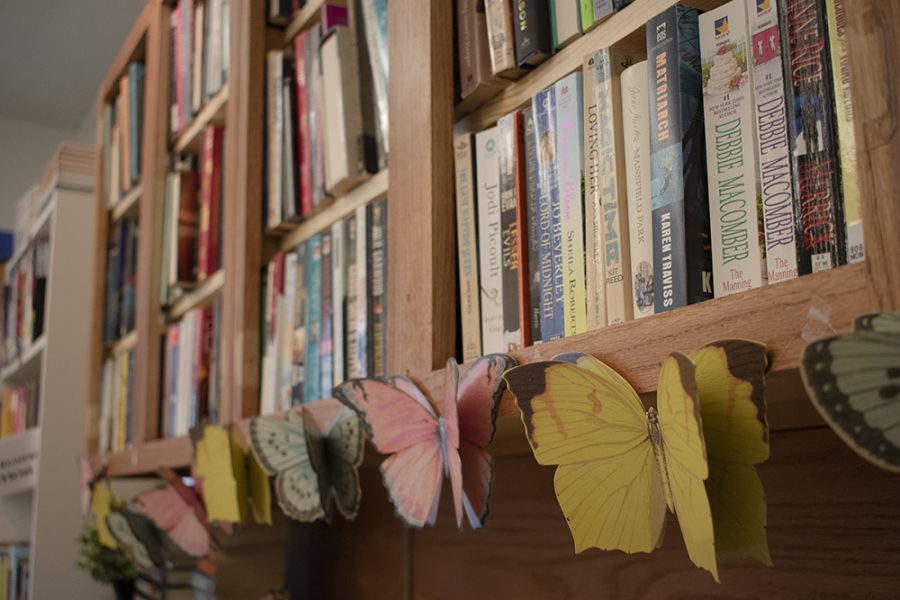 Gal’s Guide Library is located in the Nickel Plate Arts building. The library opened in the beginning of March 2020.

Monopoly. Aquariums. Fire escapes. Toll House cookies. As random as these all may seem, they were all invented by women. And yet, many people may not be aware of these accomplishments, which pushed one local group of women to push for something different.

The women of Noblesville’s Gal’s Guide Library make it possible for women’s history to be acknowledged.

“Gal’s Guide is the first women’s history lending library in the United States. We are a nonprofit that celebrates and shares women’s history with programs, podcasts, clubs, and of course our library,” Leah Leach, founder of Gal’s Guide, said.

Based in Noblesville, Gal’s Guide Through the Galaxy provides several texts written by and about historical women figures throughout history. All a person needs to check out a book is a library card.

“The hope was always to have the library in Noblesville,” Leach said. “We were open to wherever the library needed to be, but we are so happy that we’re in the heart of Noblesville.”

Although establishing the library was not easy, the group persisted.

“We searched for a year for funding and a location to open the library to the public. We were so thankful to find a spot at Nickel Plate Arts. However, we opened 11 days before the pandemic shutdown,” Leach said. “During the pandemic, we put together online camps for adults called “Wonder Woman Academy” and “Uhura Training Academy.” The “Wonder Woman Academy” was for personal growth and warrior training. “Uhura Training Academy” was about STEM gals with a focus on women of color.”

Leach came up with the idea of Gal’s Guide after creating a women’s group with her friends.

“I started a casual women’s group in 2013 to support and uplift the gals in my friend circle. It soon became clear that we could help more people so we formally became a nonprofit. Our mission was to create educational programs for schools and for the public. In 2019, we got the crazy idea to start a library and couldn’t believe there wasn’t a lending library dedicated to women’s history in the United States,” Leach said.

Since then, Gal’s Guide has gathered a hard-working group of individuals to help keep the library running. Bonnie Fillenwarth, another lover of books and art, decided to join Gal’s Guide after meeting Leach at an art fair at the Noblesville Courthouse.

“We became fast friends, and she invited me to Gal’s Guide events, and I became more involved in the group.  Leah messaged me one day asking if the idea for a women’s history library was a crazy idea, and I assured her it was not,” Fillenwarth said.

Fillenwarth currently works as the library’s manager, as well as the grant manager. Since the library is a non-profit, all money for necessities such as advertisement and rent comes out of their own pockets.

“Gal’s Guide seeks out funding for all types of projects.  We are currently working on proposals for building a women’s history database and digitizing our collection,” Fillenwarth said. “We also apply for grants that will support the library in more general ways to pay for things such as rent, supplies, and staff.”

“Book donations can be mailed to or dropped off at the library.  We accept all books.  Books that fit our mission of being written by or about a woman go into our collection.  Books that do not fit that criteria we have for sale,”Fillenwarth said.

However, books aren’t the only donations they are willing to accept.

“We always have a donate tab on galsguide.org, no such thing as a small donation,” Leach said.

Volunteers help run the library, including head volunteer Mona Mehas. Mehas has been a volunteer for around six months and enjoys her time at the library.

“I just like being surrounded by books. I’m also a writer and avid reader,” Mehas said.

Women have served as important inventors and creators throughout history, but people are not as aware as they should be of these significant accomplishments.

“Women were the first to do a lot, like invent the internet, invent rock n roll,” Mehas said.

Mehas believes the public lack of knowledge regarding women’s history gives the library a significant importance.

Senior Cameron Riley has visited Gal’s Guide Library and also sees a need for libraries like this.

“It is absolutely important to have a women’s history library, just as it is important to display stories and history written by all minorities. Ideally, the voices of oppressed groups would be part of general education and knowledge, and we would not need to amplify those voices to make them heard,” Riley said. “It helps expose individuals to stories written from a perspective other than their own, and a history that they have been shielded from.”

Fillenwarth hopes to increase the diversity of the library’s collection to make their offerings more inclusive.

“It is very important to have a diverse collection of books because women are very diverse,” Fillenwarth said. “We all come from different backgrounds, and all have different stories to share.”

Many researchers have said that history isn’t created by one gender or race, that stories need to be shared in order to tell the truth about the past. The staff at Gal’s Guide agrees.

“If we don’t tell women’s history, just over half of our history as a human race is lost. Women throughout history did more than make babies and clean houses,” Fillenwarth said.

The library’s staff believe that women have been overlooked throughout history, but with effort, people can begin recognizing undervalued women and their accomplishments.

“History is a path to empathy. When we know more about each other’s humanity, we are kinder to one another,” Leach said.