An un-tangled schedule: NHS senior Robbie Streit balances his time between school and a long list of extracurriculars 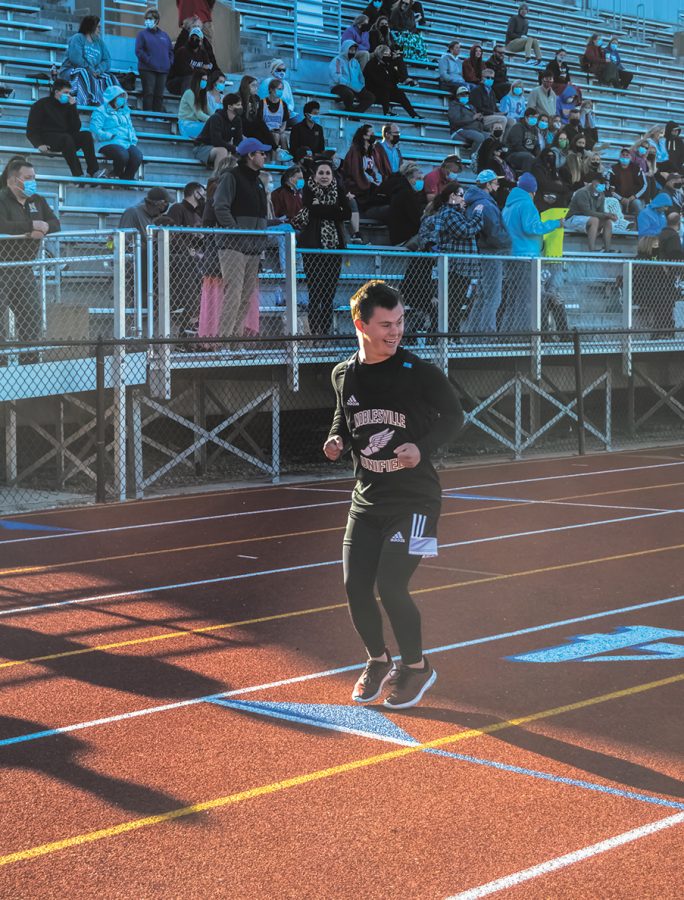 It’s 7 a.m., the usual morning lineup, but instead of starting on chores and sweeping until the floors are clean, NHS student Robbie Streit prepares for another action-packed day. Every high school student has to balance their time between school and possibly a after-school job, with a few people finding more of their time consumed by a second job or extracurricular activities. However, Streit’s routine goes above and beyond most students’ days.

A senior at NHS, Streit works at daily internships at Agapé, a therapeutic horse riding program, and weekly internships at Courtyard by Marriott. He also can be found volunteering at the St. Vincent De Paul Society, all while still attending school and running afternoons at Unified Track practice. The balancing of two internships, volunteering, and sports could easily lead to intense feelings of being overwhelmed, of drowning in work, but Streit manages his impressive schedule with a smile on his face.

When attending school, Streit attends Samantha Schwarzin’sLlife Skills class. Despite only working with Streit for about seven months, Schwarzin has developed a close relationship with him and enjoys his outlook onlife.

“His personality [makes him stand out from other students.] He’s one of the goofiest kids we have in the class. He wants to be very independent with everything [and is] a pretty good advocate for himself,” Schwarzin said.

Another way Streit stands out is the way Schwarzin says he can boost the vitality of any room he enters.

“He’s able to feed off of other people’s energy,” Schwarzin said. “Whenever someone is upset or he feels the energy is off, he’ll immediately go up and hug somebody or do something to help try and fix the energy.”

Streit’s love for hugs is something everyone around him has grown to appreciate and embrace, according to sophomore peer tutor Priscella Johnston.

“He’s very loving, very caring, always giving hugs to anybody. He’s so loving, that’s what I love about Robbie. He enjoys people. His hugs definitely are the best,” Johnston said.

Senior Jaden Moore is one of the many NHS peer tutors in Schwarzin’s class who works closely with Streit. She also enjoys being around Streit and says he possesses any qualities that make him a favorite.

“He’s definitely someone who is friendly and outgoing. He doesn’t seem to be scared or deterred by much,” Moore said. “He’s a good listener and always tries to make things good, laughable.”

Streit’s father, Jeremy Streit, says Robbie’s always been a very caring person who is willing to lend a helping hand.

“[Currently Robbie] has two internships. One is through Agapé therapeutic riding, where he does a lot of maintenance and cleaning, and works around the stables. One day a week he has an internship at the local Marriott Hotel where he works with the house cleaning crew there,” Jeremy Streit said.

Robbie was born with Down syndrome. Unlike some people who have Down syndrome, he hasn’t had any physical problems, which allows him to compete in his favorite athletics.

“I was fortunate enough with Robbie that he didn’t have many of the typical medical elements that most children with Down syndrome have so we were really fortunate to raise him where he could compete in sports and not worry about heart condition or bone structure conditions,” Jeremy Streit said. “It was pretty easy going other than the lack of communication from him and  understanding. He’s semi-nonverbal, but he can get his point across when he needs to.”

Because of his skills, Robbie has maintained two different internships, as well as assisting at a local charity the past two years with his father.

“On Wednesday evenings, Robbie and I both volunteer at the St. Vincent De Paul in Noblesville where we help with the food pantry. [Robbie’s] job is generally taking the carts of food out to peoples’ cars and loading up the trunks,” Jeremy Streit said. “We were looking together for a place to volunteer and looked up places online and found St.Vincent. We called, asked if they needed a volunteer and they said ‘Sure!’”

Something else that Streit enjoys is spending time with his family, something that never fails to put a smile on the faces of his relatives, including his older sister Payge Streit.

“[His relationship with his sister is great.] He loves going on car rides with her and listening to music. He’s always pretty excited when she comes home from college. It’s nice, because she treats him just like a normal young adult. They’ll wrestle and horse-play together,” Jeremy Streit said.

“[We are] pretty close. We still do a lot of things together, traditions that we like to do. We’ll bake things together or go out on drives together. That’s his favorite thing to do, he likes to go on drives over the summer and listen to music,” Payge Streit said. “[Growing up] he always had me doing dances with him and playing games with him. We were always having fun and coming up with things to do. It was never a boring time with Robbie.”

One of those fun moments was when they were both younger — moments Payge Streit described as special.

“When we were little…we had this little video camera, and we would make dances or movies together, and he was always so funny. For hours, I’d have him do stuff and he would be down to do it with me, no matter how long it took,” Payge Streit said.

Another memorable moment that classmate Johnston remembers is when Schwarzin taught a camping lesson, a moment Schwarzin also recognized as one of her most favorite moments with Streit.

“There was this one time in class they had a tent up, because their [lesson] was camping. Robbie came up and sat in the tent and he just started smiling because he was so happy inside that little tent. He was just dancing, and it was so funny,” Johnston said.

Streit’s track partner, sophomore Nora Sell, shares what it means to her to work so closely with Streit, describing him to be committed, kind, loving, and always projecting a joyful energy.

“It’s an honor, and it not only benefits him, but me as well. Robbie makes me so incredibly happy just with a simple smile and embrace. [He] always makes me feel welcomed,” Sell said.

With all of his welcoming energy, Streit made meeting Moore a moment Moore will never forget, as it was a reminder as to why he always looks forward to seeing Streit each day.

“I walked in, and I saw him, and his face brightened up and it just made me smile. It was just super sweet. It took about a week for us to actually become friends and for him to remember my name,” Moore said. “Working with [Robbie], you get to learn a lot about yourself. Working with Robbie has helped me figure out what I want to do with my future.”