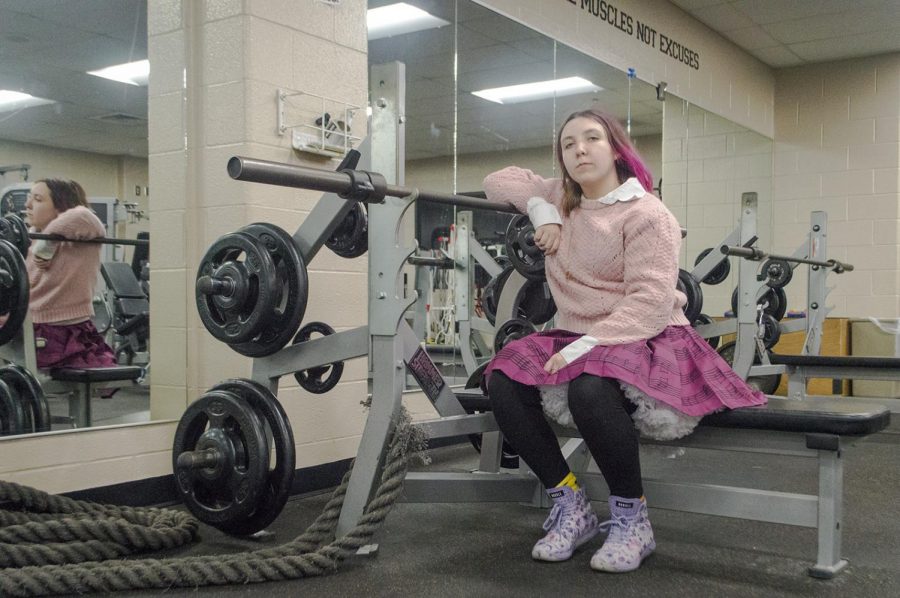 She wears pink skirts and lifts heavy weights. NHS freshman Andie Zelaya is one of the women at NHS who are proving you can be strong and feminine at the same time.

Today, the world can sometimes seem to be going backwards rather than forwards, the ideas of tomorrow can seem to be clashing with the ideas of the past. However, one constant through time has been sports. But the athletic world also seems to go back and forth when it comes to the idea of female participation in what are usually seen as “Guy Sports.” Three girls at NHS are fighting back against the idea that some sports are only “for the boys…”

Just by looking at NHS freshman Andie Zelaya, you can tell she doesn’t mind an audience. One day, she wears thick, black, patterned eyeliner that looks like it’s reaching out from her eyes. The next day, you see her in an outfit of all-pastels: flowery, lavender Doc Martens; an oversized, pink, knit sweater with a white button-up underneath; a pink skirt with music notes, with fluffy lacing underneath that’s reminiscent of a tutu.

It’s that mindset of living by her own rules and not minding the attention that drives Zelaya through one of her greatest—and perhaps most surprising—passions: powerlifting.

“I know that’s scary for a lot of people just to put your head down and go through it. But once you really get into it, people are going to notice you. People are going to notice what you’re doing, how you’re doing it, because I’m one of the strongest girls in my group, if not the strongest girl in my group,” Zelaya said. “That motivation, that people are like, ‘Oh, look at her, look at how she’s doing.’”

Before she started lifting, Zelaya’s initial experience throwing heavy things around was with her dad through CrossFit, a branded fitness regimen that incorporates calisthenics, high-intensity interval training, and, yes, powerlifting. After being recommended by a coach to try a weightlifting club for youths, Zelaya decided to try it out and ended up loving lifting.

“I feel like I liked the idea that I could feel really strong and powerful. I don’t know why, I just really loved that feeling, even though I wasn’t lifting a whole lot. The idea of me getting better was just my motivation,” Zelaya said. “I kind of had a goal in mind, because for me, I really wanted to go to Nationals. I didn’t know what it was or what it meant, but I just knew I wanted to go. So that’s why I just kept doing it.”

Zelaya did end up going to her first Nationals in California in June of 2019. Competitors are organized into classes by weight and age, and must perform two movements in front of three judges: the “snatch,” a single-movement lift over the head, and the “clean and jerk,” a two-movement lift where the lifter first stops at her chest, then raises the weight over her head. Competitors get three chances for each movement, and the winner is whoever lifts the most weight for the two movements combined.

Zelaya understands that many people may not believe that there are many women powerlifters after hearing what the sport entails, but she knows that that is not
actually the case.

“At my gym and just everywhere that I’ve gone to, there are very, very strong, powerful women. In my gym. We have posters up for people who have won Nationals for their weight class, and a lot of them are women, actually. Some of the women are recurring, and we see it all the time,” Zelaya said.

Zelaya herself says that she did not expect many women to be in the sport, but that did not deter her from wanting to join.

As with most sports, Zelaya’s motivation to continue to get stronger and perform better comes from competition among her peers. But much of her drive also comes from her simply enjoying the sport regardless of others’ opinions.

Zelaya mentions one more piece of motivation for her powerlifting career: “It feels good to be a badass.”

CECILIA PERSON PUNCHES (AND KICKS) IN

Martial arts hit the mainstream after World War II, and since then, America has altered significantly in so many ways. However, one thing that remains constant is that, for many, martial arts continue to be viewed as a masculine sport.

Cecilia Person is a sophomore at Noblesville High School who has been studying taekwondo for several years, and she stands as a symbol of the changing face of sports now open to women.

“I started taekwondo when I was six years old. It was a way for me to cope with moving to Arkansas and away from my friends,” said Person. “My parents were willing to try anything to make the move a little more seamless and easier on me.”

Sports can be a huge part of the lives of many adolescents and according to many participants, they can also play a big part in a person’s personal development.

“It (taekwondo) has helped me in a lot of ways. After having a not-so-perfect day, it’s almost therapeutic to get into class and hit the heavy bags or spar a little bit with other black belts,” Person said.

The male/female ratio in taekwondo skews towards men, but Person says those numbers aren’t a big deal to her.

“Typically tournaments and classes have a higher percentage of male participants than females, but I don’t really think it’s a problem. We talk a lot about respect in taekwondo, especially for your juniors and seniors in classes,” said Person.

NHS offers a variety of teams for students to join, and Person appreciates the benefits that sports can provide for a young student who might be looking for a place to fit in.

“I think it’s good for the school to have options for kids so that way they wouldn’t have to worry about transportation to another place just to play a sport,” Person said.  “That way too people can experiment and find out exactly what they like in the comfort of their own school and their own community.”

Taekwondo’s accessibility to both genders has continued to evolve over the years. Person has noticed the changes in person.

“In recent years, more girls are joining and participating, which is awesome to see. When I go to higher-level tournaments, the high-rank panel or head table typically doesn’t have many females up there,” said Person. “But, I think that’ll change more as time goes on. It’s always funny to me when I tell people I do taekwondo, because it always seems to surprise them.”

“I feel as though there shouldn’t be a stereotype around specific sports. If you’re into a sport, you’re into the sport, and there shouldn’t be anything wrong with it,” Person said. “I think it’s important to have a wide variety so that way you can find exactly what sport you like and aren’t limited to this small list of ‘female sports,’ because frankly, that’s just ridiculous.”

If you don’t know better, the word “wrestling” might spark ideas of colorful costumes and hardcore men performing rehearsed routines for large crowds of thousands. In the sports world, wrestling is a test of strength and of competitive energy. Wrestling also isn’t just a sport for guys, even though it is seen as a male-domainated sport

Just ask a wrestler like Kyra Tomlinson, one of the many women who are fighting back against old, tired beliefs.

Tomlinson is a freshman at NHS and one of three female wrestlers on the Miller’s wrestling team. She’s been a part of the squad for the past few years, beginning her wrestling journey in middle school.

“I’ve been wrestling since 7th grade [and I’ve been on the team] for about three years,” said  Tomlinson. “I started at the school and now I wrestle with a wrestling school called C.I.A. and I’m also part of an [all-star] Ignites girls wrestling [group].”

Tomlinson has found her own ‘life-line’ and a love for her predominantly male sport.

“Wrestling has become a part of me, my salvation is how I like to think of it. Plus I’m physically fit, you know? Multiple plus…” Tomlinson said.

Although most sports at NHS include a girls team and a boys team, wrestling is an exception, with a large difference in the male-to-female ratio.

“There are three of us this year, three girls and like 15 guys. There isn’t really a girls team, but hopefully there will be next year if more girls come in,” Tomlinson said.

Some schools have girls [on their team], but I usually wrestle guys. The only real time I get to wrestle girls is in a tournament.”

Tomlinson thinks the “Boys Only” view of the sport may change in the future.

“It can be [male-dominated], guys are really strong and fit, [but] my body’s changing and I’m becoming more muscular. And it is boy-dominated, but I do think the girls are going to take over,” Tomlinson said.

The sports community at NHS is changing and Tomlinson thinks this shift is here to stay.

“In general, girls should get to choose from any range of sports. Sports shouldn’t be male-dominant or female-dominant, and girls should have the option to play that sport if they truly love it. Like wrestling… I love the sport, so I’m gonna wrestle no matter what,” Tomlinson said.