Back in Action: Members of this year’s musical recount the importance of being able to perform this year

It’s a dark auditorium, the air full of anticipation. The curtain rises, the lights come up, but the stage is barren. No performers, no show, only the shell of what could be there, the whisper of a purpose, of a dream. 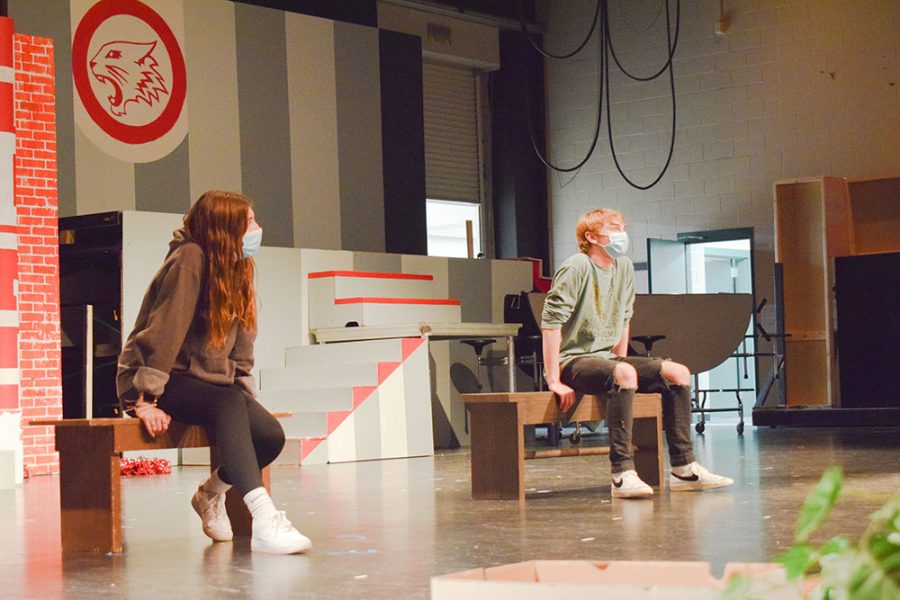 Actors Maddux Morrison (Troy Bolton) and Anna Schlueter (Gabriella Montez) rehearse for the upcoming school musical. Both Morrison and Schlueter have taken the spotlight after years of performing on the stage.

It’s a dark auditorium, the air full of anticipation. The curtain rises, the lights come up, but the stage is barren. No performers, no show, only the shell of what could be there, the whisper of a purpose, of a dream.

Amidst a COVID-ridden school year, many extracurricular groups at NHS were canceled due to safety concerns, leaving the student members of these activities with gaping holes in their high school lives. But as the curtain rises on a new, fuller year, new life is breathed into the school, especially the auditorium as the teenage actors return to the stage. For those immersed in the world of NHS’s theater, the cancelation of the school’s musical last spring marked a serious loss for the school year.

“It honestly crushed me,” senior Lauren Rohn, who plays Sharpay Evans, said. “We were going to do “Little Shop of Horrors” and that sounded really fun, [it] would’ve been a great way to get back into the community and start fostering new friendships. When [that] opportunity gets taken away from you, it sort of crushes your spirit a little.”

Rohn isn’t the only member of the school’s theater that felt their spirit diminish from this cancelation. For her and other enthusiasts that have been doing theater for large portions of their lives, the inability to perform left something missing from their day-to-day.

“Performing has been my entire life, that’s what I love to do and I usually go from doing the fall musical to the spring play and then I usually do a show over the summer, so I’m usually always busy,” junior Maddux Morrison, who plays Troy Bolton, said. “Having nothing to do performance wise was just so weird, so getting back into it now has been a lot of fun.”

Getting back into the classroom hasn’t erased all of the problems that arose from COVID, though. It’s been difficult for just about everyone to adjust to being back in action.

“I think that it was really difficult and I wouldn’t say that they forgot that we had a musical, but I think that whenever you find a void, people find other things to fill it in with,” the director of the production John Neubauer said. “So, I wouldn’t say that interest is lower, but I do think that some people just said ‘Eh, maybe they’re just gonna cancel it again, I’ll find something else to do.’”

Having the musical this year has raised a few questions among participants, mainly about safety. With the pandemic still happening, the theater organizers have had to continue with safety precautions.

“This is way better because we’re here, even if we’re wearing masks, but last year with the hybrid [schedule], the bell would ring at 3:30 and it felt like a ghost town. In five minutes, there was not even anybody in the building,” Neubauer said.

The ability to perform brings strong emotions for the student actors. The excitement of being back on the stage, in addition to the nostalgic choice of show, brings an important impact on the actors and the audience alike.

“I appreciate the approach that the director’s taking in finding the deeper meaning. ‘High School Musical’ on the surface is [just] Troy Bolton and Zac Efron and all that fun stuff,” senior Anna Schlueter, who plays Gabriella Montez, said. “But if you look into this story it’s all about stereotypes and how everyone thinks they’re on this set path in high school that they have to follow and people freak out when anyone goes against a certain standard because it’s different.”

The performers say the musical brings many important lessons to the surface, and in a story centered around high schoolers and their struggles, it’s hard for some students not to relate their current struggles to that of which is stressed in the musical.

“Change is scary, I get that, but ‘High School Musical’ is showing that when people are faced with change it’s that whole aspect of that internal battle of ‘What am I supposed to do? How am I supposed to react? Where am I supposed to fit into this?’” Schlueter said. “It’s also this acceptance of who you truly are and staying true to your character and not letting anyone define who you are.”

The lessons extend behind the stage too. Despite the stress of getting ready for such a big show, it’s difficult not to see the improvement that’s bred amidst such a work-heavy environment.

“When you get to the end of the show and you’re like, ‘Oh my gosh, that was a lot of work,’ but it was worth it because people had fun, people learned a lot, we saw people go from being maybe C-level to being incredible, witnessing people transform from high school kids to great performers,” said Neubauer.

Being back in action means there’s plenty of change to be had for actors new and old, and even more, it means that students are able to get back a piece of themselves that was taken in the pandemic.

“Music will always have my heart and just being able to be on stage and tell the story of high schoolers in a way that everyone overlooks. High schoolers are very overlooked in the sense that we’re dramatic or very stereotyped, and so this show allows for a lot of kids to be able to relate in ways they didn’t recognize before,” Schlueter said. “Just being able to be with people after a year of very limited interactions and very little music, it’s nice to have normalcy back.”