Fooled Me: An analysis of the most immature ‘holiday’ 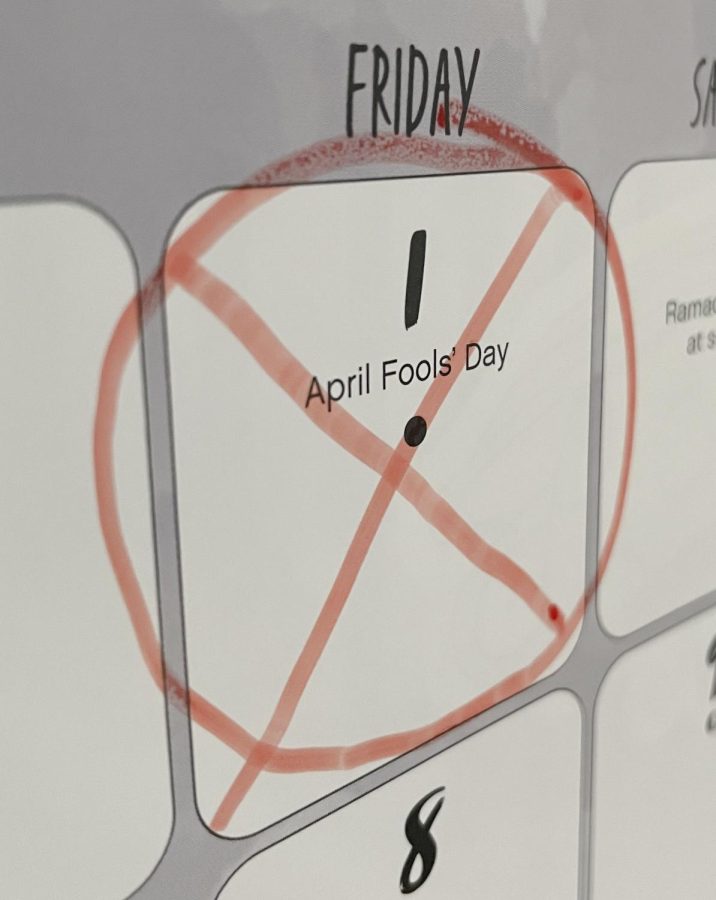 The date of April first can lead to a host of problems. This dreaded day is approaching quickly.

ATTENTION, ALL SCHOOL HAS BEEN CANCELED UNTIL FURTHER NOTICE! Effective immediately, all students will return home to participate in virtual classroom activities for the next few months. SIKE! April Fools’! Oh sorry! Did that stir up some mixed feelings? This ‘holiday’ is a day for pranks and for jokes, but oftentimes these goofy giggles are taken too far and blown out of proportion. Let’s just say, as someone who anxiously awaits May flowers, I’m more than ready for a drought of these drawn out pranks.

I’m not a fan of these extreme methods of trickery. Don’t get me wrong, I do love a good pun or dad joke every now and then. However, there is a time and place, and it shouldn’t be an annual ‘holiday.’ This day is just an excuse to pull cruel jokes on the members of our community that we hold dear.

Now I will admit, I can be bitter when it comes to these jokes. With my parents claiming spring break had been canceled or aggressively waking me up early on a Saturday morning, yelling I missed the bus, or even a friend sticking gum in my hair, I assure you this is not a holiday. I have even tried to become a major prankster myself; telling my closest friends I was moving to North Carolina was not my proudest moment. It most definitely resulted in many tears and quite a bit of fury when I muttered “April Fools.”

Where did this day originate? And the more pressing question is why? April Fools’ Day came to be over a span of many centuries and grew and adapted within different cultures and civilizations. According to historians, the term ‘April Fools’ can be spotted throughout many time periods including ancient Rome, early 16th century France, and even 18th century Britain and Scotland, from which the practice of practical jokes came into play.

While first created to mock the members of society who missed the switch of calendars in France, the fooling has grown to new lengths including humiliation and even pain, both physically and emotionally.

It all comes down to the prankster, the pranked, and, of course, the situation. There are many instances where a seemingly great innocent joke can turn upsetting and even end up causing the pranked a great deal of embarrassment or even take a physical toll. Dr. Troy Madsen, an ER physician from Utah, spoke on how he often will see instances of individuals who did not understand how dangerous a prank could become. In Western Australia, an employee filed a claim in 2016 against a fellow coworker for spraying him with flammable cleaning chemicals and obtaining serious burns.

In no way am I suggesting that these types of jokes can’t be fun. There is a moment for every joke, a moment for every prank, and even a moment for some laughter at each other’s expense. But these all need to be consented to, and we make sure that we can keep each other safe. You should consider holding back on the joke that seems questionable and maybe not putting Nair into your sibling’s shampoo. Consider thinking about how you would feel if you came to face this April Fools’ joke.

As this day comes and goes, may you remain safe and smart if you choose to prank or if you find yourself the victim of a prank. April Fools’ is a holiday that has been around for centuries and will be for many more. As this year’s approaches quickly, I’ll be hunkering down in my bunker.