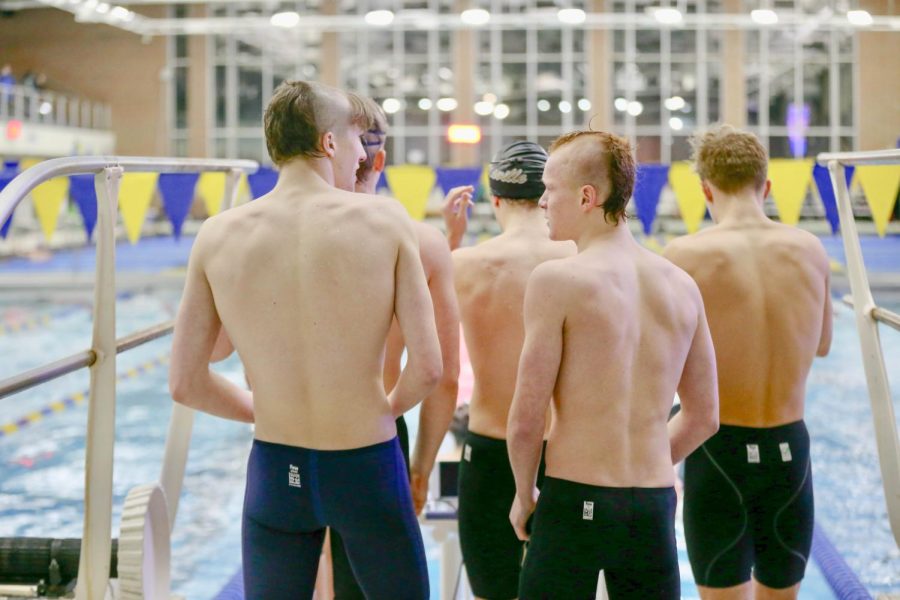 Caleb Mathis and Sean Halvorsen, both sophomores, get hyped for their preliminary events at the 2022 boys sectionals meet.

You can recognize them from a mile away. They travel in packs, but each fights their own independently. They’re awake before you, and often lingering around after school later than you. The stench of chlorine follows them everywhere they go. As you approach them, fear spreads throughout your body. You feel a tingle down your spine. You hold your breath as you edge closer. But fear no more, there’s no predator after all. It’s just the Noblesville boys swim team.

Every year before sectionals, the NHS boys swim team partakes in a unique tradition. The swimmers take turns cutting their teammates’ hair into comical shapes in preparation for boys’ sectional prelims. The haircuts span from funny symbols to zigzags and stripes to mohawks reminiscent of that of ‘70s punk rockers. A few days later, the boys then lose their new ‘dos, shaving their heads into a buzz to swim in the final round of sectionals. Some may call it an odd practice, but this practice is deeply rooted in the history of Noblesville’s swim team.

“This has been a tradition here at Noblesville for far longer than I’ve been here,” said junior Aidan Biddle. “It does not have any actual impact on our races, because we all wear caps anyway, but it brings us closer together as a team and unifies us before our biggest two meets of the year, sectionals and state.”

Like Biddle, sophomore Zak Armstrong hopes that the eye-catching traditions of his team can bring attention to what he thinks is a sometimes underappreciated sport.

“Not many people come to swim meets or anything, so I think it puts us on the map, in a way,” said Armstrong. “It just shows who we are, what we stand for, and that we move as a unit.”

While shaving patterns and designs into their hair may seem unique to Noblesville, this tradition most likely stems from what used to be a common practice within the sport.

“I can very distinctly remember when I was swimming, it was more common that the entire guys team would shave their heads, so that was pretty normal. Strangely, it’s not as normal now, which makes our tradition here kind of this whole new thing,” said Aleks Fansler, the head coach of the Noblesville swim program.

Sophomore Caleb Mathis hopes his team’s participation in this now rare tradition sets them apart and intimidates other teams.

“It’s one of the things that defines our team,” said Mathis. “When people see our shaved heads, they know, ‘Oh, that’s got to be Noblesville.’ We’re one of the few teams that does that.”

The continuation of this once common tradition cultivates a deeper and truer connection among the swimmers when compared to surrounding teams, according to Fansler.

“The sport allows them to be themselves here,” Fansler said. “You get these kinds of kids together, the ones that participate, they don’t mind that they cut weird designs in their hair and walk around the school and have people look at them and be like ‘What in God’s name are they doing?’ [The boys] know that this is our culture, this is what we do.”

This tradition now spans multiple generations of Noblesville boys swimmers. Assistant coach Zach Bleisch was also a swimmer on the boys’ team during his time as a student here at NHS. He remembers this tradition from his high school years.

“It’s really fun because even from when I was swimming in high school, the boys’ swim team is just very goofy and [this tradition] is an outlet just to be very goofy and not take yourself too seriously,” said Bleisch. “Even though we’ve got this big meet, you’re still having fun and still enjoying the company of your teammates.”

Because of the similarities Bleisch shares with current swimmers at NHS, the team members say they are very fond of him. They state that they see him as a friend or a teammate, and not just another coach.

“He has made our head coach’s job a lot easier, and it also allows for each swimmer to get a lot more individual attention and feedback,” said Biddle. “He has told us about his time as a swimmer as well as his two brothers’ time here.”

The legacy of NHS swimming is not simply fostered in the pool. It’s the traditions or rituals that have carried through hundreds of NHS swimmers that continue on the brotherhood of the program.

“It has been happening at the very least since my older brother started swimming, so that would have been 2008. It was pretty strong of a tradition even then,” said Bleisch. “We have those connected values of being a Noblesville swimmer. Even from when I was there to now, you have those very specific traditions and shared experiences.”

Both alumni and students alike recognize how special these practices have become to the team. However, according to Fansler, today’s swimmers may not fully appreciate these long-standing traditions until the program is far in their rearview mirror.

“It’s one of those things that the alumni probably appreciate more than the kids actually doing it at the time,” said Fansler. “To me, it’s one of those things that when you’re in it, you don’t really see the broader impact of it, but when you graduate and you see that three years later the team is still doing that. It ties the alumni into the program more than the current swimmers realize.”

It’s traditions like this that have built the program from the ground up that makes their culture so rich, according to Fansler and Bleisch. They believe even the smallest traditions, ideas, and moments make their legacy continue on.

“I think there’s all these little tiny things that show the strength of the legacy and of the culture. Because they’re not big moments, they might go unnoticed, but it’s one of those retroactive things,” said Fansler. “The more powerful things are the things that happen daily. That legacy is always there, and you don’t realize that it’s working.”