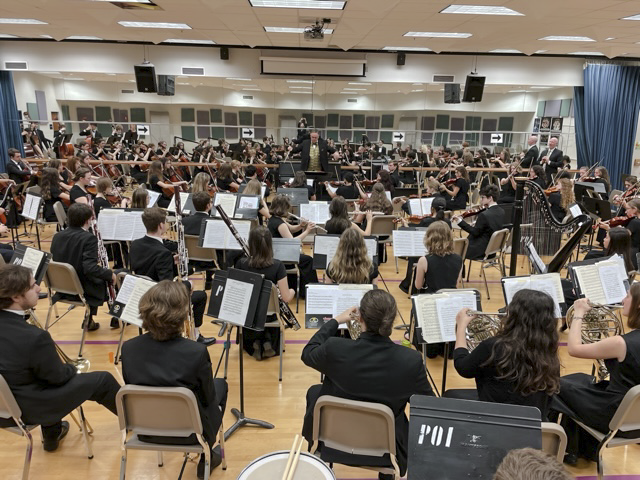 “Orpheus in the Underworld” is known to every band student around NHS: it’s the now-famous show the Marching Millers performed in the summer of 2021. The character Orpheus is the mythical bard of music, known for his ability to charm with his song and poetry. He may be seen as an old Greek legend, but his music still captivates audiences today. “Orpheus in the Underworld” brought success to the Marching Millers. What audiences may not know is that “Orpheus” also brought success to the Noblesville orchestra.

At the beginning of May, the NHS orchestra competed in the Indiana State School Music Association (ISSMA) orchestra competition state finals for the first time ever in the program’s history, setting a standard they’ve never reached before. For the students, this was an entirely new venture and likely unexpected, but for Noblesville’s longtime orchestra director David Hartman, it has been a highly awaited goal.

“Only the top eight orchestras get to qualify for state, which is different [from] band and choir where [the] top sixteen can qualify, and that’s just because not every small school in Indiana has an orchestra,” Hartman said.

Hartman has directed the orchestra at NHS for 30 years. Since his arrival, he says he has dreamed what most Indiana orchestra teachers dream of: qualifying and going to ISSMA’s state competition.

And this year, his dreams came true.

“I’ve been asking myself, ‘How did we get there this year? Why did we get there this year and not other years?’ And I think it just has to do with the personality of the group itself. We’ve just had a lot of really nice, hard-working kids who want to listen and take what I say to heart and really strive to get better every time they play,” Hartman said. “I think that was one thing, I think the kids really just wanted to work together this year. I mean, after the year and a half of COVID … I think they just enjoy working together and progressing.”

The symphonic orchestra had to place top eight in the state to merely attend state finals competition, and their placement relied heavily on a key district performance.

“When we were at the district contest, we gave a great performance at Lawrence Central [High School] and I thought, ‘Wow. I think we have a shot’ or at least, ‘This is our best performance we’ve given in the history of our contests.’ I was pretty hopeful then,” Hartman said. “Once I started seeing our scores, I was like ‘Oh my gosh.’ And then I looked at the next [scores] and I was like ‘Oh my gosh. OMG- Oh my God.’”

Hartman makes sure to emphasize the difference in his orchestra teaching compared to ground-level instruction.

“I always tell my high school students, ‘Yo, when you’re in sixth grade, you get up there, you play something, [your parents] might not even recognize what it is [you’re playing], because they’re like, ‘That’s my kid, I’m so proud, blah blah blah…’ because they’re just happy you’re doing it and you’re on stage and you’re taking chances and stuff,” Hartman said. “And I was like, ‘You’ve been playing your instrument for three years now. We need to start making something people want to hear, type of thing.’ That’s kind of always been my approach.”

But above all, Hartman repeatedly cites one concept above others: progress.

“To me, I always tell the kids: I just want them to improve and get a better score than we’ve had in the past,” Hartman added. “They blew it out of the water. To go to state, you just have to be at a really high level of performance and musicality.”

Melendez has been playing the upright bass since 6th grade and loves her instrument. She says she has pushed herself and those around her to become the best they can be.

“This year when I heard that we could go to state and that we were going to try to, I was so excited because I wanted to go. This is my and every other bass [player’s], except one’s, first year attempting to go to state, and I was like, ‘Wouldn’t it be so cool if we just like, made it to state on our first try?’ It was just exhilarating,” Melendez said.

Often, Melendez sees a connection between her motivation and her leadership role, saying she looks to encourage others as much as herself.

“I like being the bass section leader,” Melendez said, “Whenever we go to sectionals, I like being able to help everybody and tell them, ‘This is this, and this.’”

Even though Melendez has been section leader both semesters this school year, she says she is shocked by her own success.

“I didn’t expect it, it’s a big honor you know?” Melendez said, “It’s like, wow. I get to be a part of this thing. I get to help people in my section, and delegate to people like, ‘Okay, you’re playing that part and you’re playing that part,’ because we have split parts sometimes. I have to think and decide who would be best on what part so that we have a strong bass section in total.”

Melendez, like many musicians, finds a strong connection among the orchestra’s various musical pieces, and “Orpheus” didn’t differ.

“When we play a good piece of music,” Melendez said, “it feels like, ‘Wah!’ You know? Like when we played “Orpheus” for state, it was so cool. When we were at state qualifying, we ended and everybody was on the same note and it went loud to quiet. Then [the conductor] was like, ‘Stand up’ and it was so cool.”

With the year coming to an end, Melendez is already looking ahead.

“Now that state is over, we’re looking at new music for next year and it’s like, there’s more, you know? Every time that it ends,” Melendez said, “there’s more to happen next.”

For many orchestra members, the sudden success caught them off guard.

“In the beginning, I honestly didn’t expect to make it to state,” said Ava Rennard, one of the symphonic orchestra’s senior violin players. “Things got more surreal as we got closer, because I realized, ‘Dang, we sound pretty good.’ When we found out the Sunday after state qualifying, I was in the car and lost my mind. As a senior, it’s incredible to know that I contributed to Noblesville orchestra history, as it was our first time ever making it to state. It felt like all the work since I was 5 years old paid off.”

Like Hartman and Melendez, Rennard makes sure—after all the practice and all the music and all the classes—the program shows a continued focus on community.

“We had rehearsals once a week and spent every class perfecting anything Mr. Hartman didn’t like the sound of. It felt like a lot, especially when you’re taking classes and working at the same time, but I felt like it really contributed to our sense of community and friendship. The most important thing we recognized was the fact that we love to play music, and we especially love playing it together,” Rennard said.

While Melendez, continues on in Noblesville’s orchestra, seniors like Rennard have effectively reached the end, bringing a unique perspective with them.

“All we really wanted was to make Mr. Hartman proud,” Rennard said, “and I think we did exactly that. As a senior, I can’t do much in the future, but I hope that the underclassmen keep working towards being better for next year. I’m incredibly thankful for our director, who has dedicated so much time to our orchestra, and built this program up since he began teaching at Noblesville. Thank you Mr. Hartman, no matter how annoying the little details may have been, you’re the reason we made it this far this year. You deserve the title.”