A Shot Into Rhythm 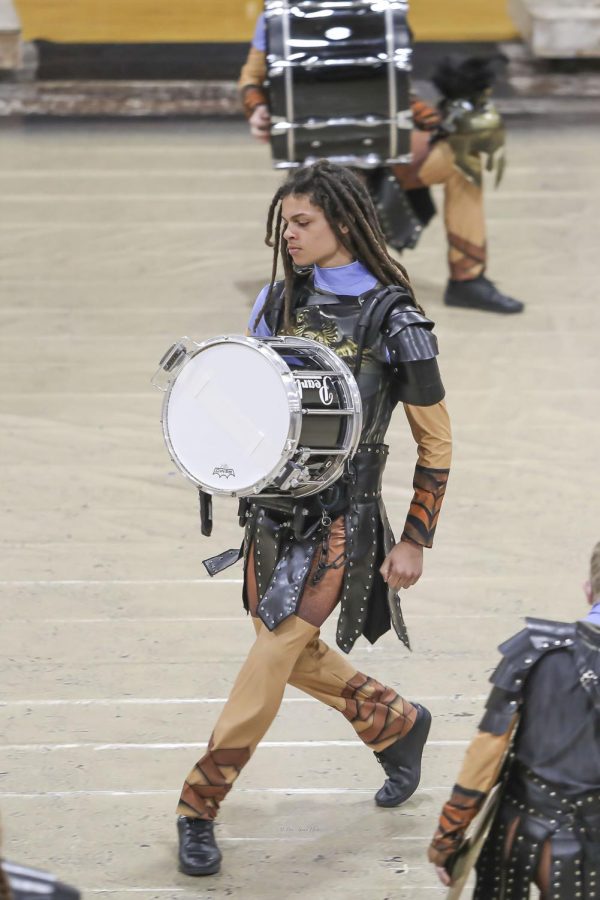 Senior Jabulani Ngoma, whose name means “celebration and rejoice” in the Zulu language, grew up surrounded by the two things that he enjoys today: Film and Music.

“Music has been a big part of the culture of my family,” Ngoma said. “My brother is a music producer and my dad is a famous musician from Malawi.”

With the hold music had on him growing up, he discovered a love for drums, something he frequently plays in many different extracurriculars here at NHS.

“I’m in the wind ensemble, the symphonic orchestra, and Jazz 1,” Ngoma said.

He’s received Most Outstanding Member the past two seasons of drumline during marching season and had been nominated on two other occasions.

He also participates in NIPE (Noblesville Indoor Percussion Ensemble) as well as marching band, two things that have helped him grow in his journey.

“Marching band and NIPE are what I would call the defining variables in my growth as a human being and a musician,” Ngoma said. “I truly believe that without these experiences I would not be the person that I am today.”

Ngoma isn’t the only one who feels this way. Jazz band teacher, Bethany Robinson, has taught Ngoma since his freshman year and is impressed by his skill.

“He took a JEL class [junior year in place of jazz]. When he came back in his senior year, I didn’t know how he had progressed or if he had stopped. Generally [after a year] they lose a lot of their talents or skill set. Jabu somehow was able to not only maintain but to grow on his own over that year and it was really impressive and he has been an amazing drummer to have in jazz one this year and it’s been really cool to have him there.” Robinson said.

Band director Eric Thornbury agrees. He’s not only impressed by his skill but his personable attitude.

“What sets Jabu apart is his attitude and positive personality,” Thornbury said. “He is obviously a super talented musician, but he is also a joy to teach and work with. He brings his positive energy, sense of humor, and just good vibes into everything and it affects the other students and his directors.”

Not only did music make an impression on Ngoma when he was younger, but video production did as well.

“My brother’s friend group has always been super into film and video production so growing up around that inspired me to start creating,” Ngoma said.

Having a passion for something can ultimately bring people together, and with Ngoma and junior Rylan Cripe, it created something special.

“The first time I became aware of Jabu’s interest in filmmaking was two years ago when he posted that he was creating a short film, The Subjective Mind. I had been involved in theater and acting for years prior, so I told him I would love to be an actor in his film, and he let me do so,” Cripe said. “You could see his investment in his creation as he directed everyone and made sure the movie was as good as it could be.”

“He brings that same directing energy on the set of Fine Arts Friday every time we record with a new guest artist that may not have experience on camera,” Cripe said.

He co-directs Fine Arts Friday with Cripe, a news segment they created that informs the musical talent and upcoming fine arts events here at NHS.

“Each segment we also showcase an “Artist Of The Week”, a senior at Noblesville that shares stories and moments about themselves and the fine art they’re involved in, as well as demonstrating or showing that fine art for the school to see,” Cripe said.

Ngoma’s passion and practice of film don’t end with FAF. In his spare time, he creates personal films based on subliminal experiences in his and others’ lives.

“So far I’ve mostly made psychological thrillers that deal with people’s descent into madness,” Ngoma said. “But recently I’ve been trying to branch more into films that people can relate to and understand rather than try to interpret”

And while his journey through cinematography hasn’t been easy, he doesn’t let his struggles stop him.

“A lot of the time, I struggle in the way that I feel like I’ve stopped improving in drumming and film,” Says Ngoma. “The feeling of doing something for so long and thinking that you may not be improving and getting better is painful and it’s harmed my mental health at times. But then I just have to remind myself that if I slump down and stop grinding I’m never going to get better.”

And while he perseveres through his doubts, he continues to stick to his craft and create.

“My main goal is to entertain and to make stories that the audience can interact with,” Ngoma said. “I’m currently working on a feature-length documentary about the jazz band and their journey to the essentially Ellington competition,”

The passion and dedication Ngoma has for film and music shows, and it’s shaped him into the admired person he is today.

“Jabu is a very talented man with a wide variety of skills and abilities, all of which he excels at,” Cripe said. “Jabu always puts 100% effort into whatever activity he does, and he is overall just a wonderful and genuine person to be around,”