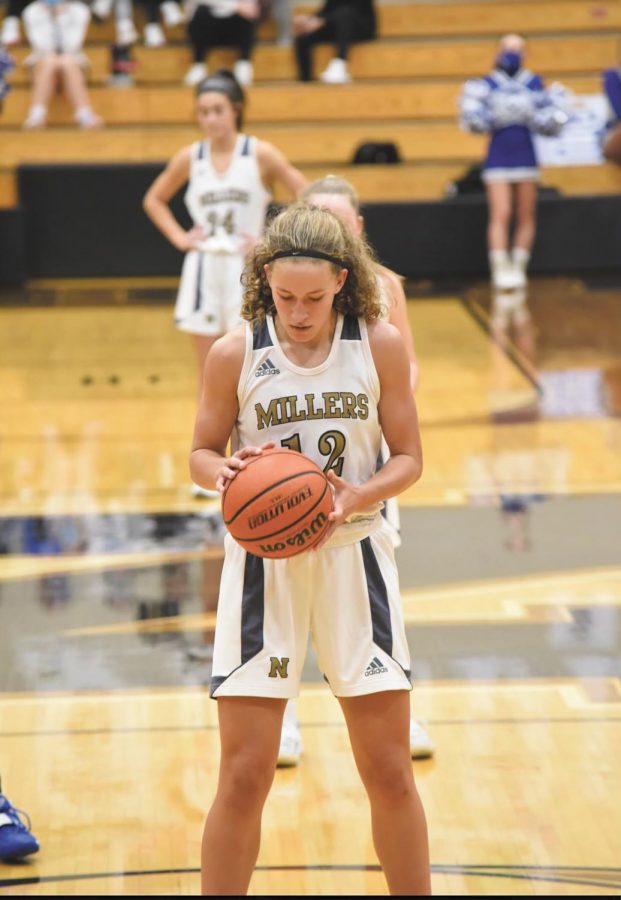 A Life In the Spotlight: Noblesville sophomore basketball sensation Ashlynn Shade reveals what life is like under the eyes of many

Thousands of eyes turn their way towards you, scrutinizing you at every given moment; one wrong move and they’ll disregard you for not living up to their expectations.You have become prey to the pressure of being held in such a high regard; the pressure that comes with this attention bubbles up within you, convincing you to believe that you must meet, or perhaps even exceed, their expectations. As time goes on, you can’t help but feel as if there’s nothing you can do to relieve this aching weight upon your shoulders — you think that it’s only a matter of time before you succumb to the overwhelming pressure.

Although it would be expected that such a demanding lifestyle would negatively affect one’s mental well-being, for one particular student at Noblesville High School, being under the gaze of so many simply doesn’t affect them; unlike many who have been exposed to the immense stress of being a national sensation at such a young age, girls basketball phenomenon Ashlynn Shade, who has been recieving college offers and scholarships since her middle school days, does not let such expectations interfere with her way of living. Shade finally discloses how she continues to lead a relatively normal life while dealing with the pressure of being the talk of the town.

“She was in elementary when I first saw her play, and it was obvious [even] at that age that she was really talented,” Buckley said.

Although it was evident from the start that Shade had talent, when she began playing basketball, she surprisingly didn’t like it all that much.

“When I first started [basketball], I was playing with boys and my brother, and I did not like it at all, but once I started playing on girls teams and [began to understand] the game more, it got more enjoyable and I started to really develop a love for the game as I got older,” Shade said.

Ashlynn’s twin brother, Jack, recalls the time he played alongside his sister.

“When [Ashlynn] played on [an] all boys team, I didn’t think much of the fact that she was a girl playing on a boys team, I just thought of her as another one of my teammates, but I could tell she was more focused than the rest of us,” Jack said.

“Ash is the most hardworking and determined [person] I have ever met. She is very competitive, and has a desire to win, sometimes to the point where [we] can’t play 1v1 without us ending up in [an] argument,” Jack said.

One of Shade’s longtime teammates who helped her discover her love for basketball, Brooklyn Ely, eagerly attests to Shade’s extraordinary talent.

“She is a very passionate and competitive player; she is definitely a team player but also knows how to step up and become a leader when needed. [She’s] always there to help me [and] my teammates,” Ely said.

Buckley, who has been the head girls basketball coach at NHS since 2008, admits that Shade is the rarest talent she has come across in her coaching career.

“We coach all of our kids with high expectations, [but] Ashlynn [has] a special talent. She is the best high school player I have ever [seen.] She can play any position on the floor… [and] she averages 22.2 points, 4.4 assists, 8.4 rebounds, and 5 steals [per game],” Buckley said.

Shade’s outstanding basketball statistics are all because of her unwavering dedication to improving herself every day.

“I practice every day. School practice is two hours and then usually I shoot around or have a basketball workout outside of school for about an hour, so [in total] probably around 3 hours a day,” Shade said.

Shade’s otherworldly capabilities have not gone unnoticed by people outside of Indiana — in fact, she is currently on the this year’s “Jersey Mike’s Naismith High School Trophy Underclassmen Girls Watch List”,which is a list of 25 underclassmen girls basketball athletes from all over the country.

“I didn’t think [basketball] would be as big a [part of my life] as it is today. I just thought it was fun to play when I was younger, but I had no idea it was going to lead to this,” Shade said.

However, with great success comes the pressure to continue to succeed; Shade acknowledges the stress of it all, but quickly brushes it off.

“It can be stressful sometimes, but I have a great support group that helps me along the way and they help me manage all of the [stress],” Shade said.

In fact, among her support group is her twin brother who plays baseball for NHS. Together, they’re a force to be reckoned with.

“Jack is my best friend. We get along so well together and we’re just always with each other; we both support each other with our sports. I throw the baseball with him [and] he shoots baskets with me. He’s just my best friend,” Shade said.

Ely, another life-long friend of Shade who has been playing basketball alongside her since the fourth grade, believes Shade has rightfully earned all of the recognition she is receiving.

“She is the most hard-working girl I know; she works harder than anyone out there… she definitely deserves all of the attention she is getting,” Ely said. “Every single thing you would look for in a typical female athlete…Ashlynn has.”

As Shade’s sophomore year is drawing to a close, she can’t help but to eagerly await a future in which she continues to do what she loves most: playing basketball.

“It’s always been my dream to play at a high level, so I want to play basketball in college and then professionally — whether that’s in the WNBA or flying overseas,” Shade said.